A Message from the Curator

As we are now slowly emerging from lockdown and travel distancing are being eased, I'm delighted to once again be able to bring a small group of artists together and present this collection of artworks at Baile na Cille.
With stunning charcoal and graphite drawings from Margaret Uttley, aqueous abstractions from David Knight, my own gneiss work and the introduction of guest sculptor Marianne Broch's beautiful 'Core'.

A sense of progression and escape is suggested from the devastating effects of COVID-19. Not quite a living form itself, but acting as a continuous reminder of how our life on this planet hangs by a thread, how isolation affects us all stranding us on our own islands, a time for contemplating the future and considering optimismtic actions over planetary issues as we emerge and escape from difficult times. Let us not let this happen again! 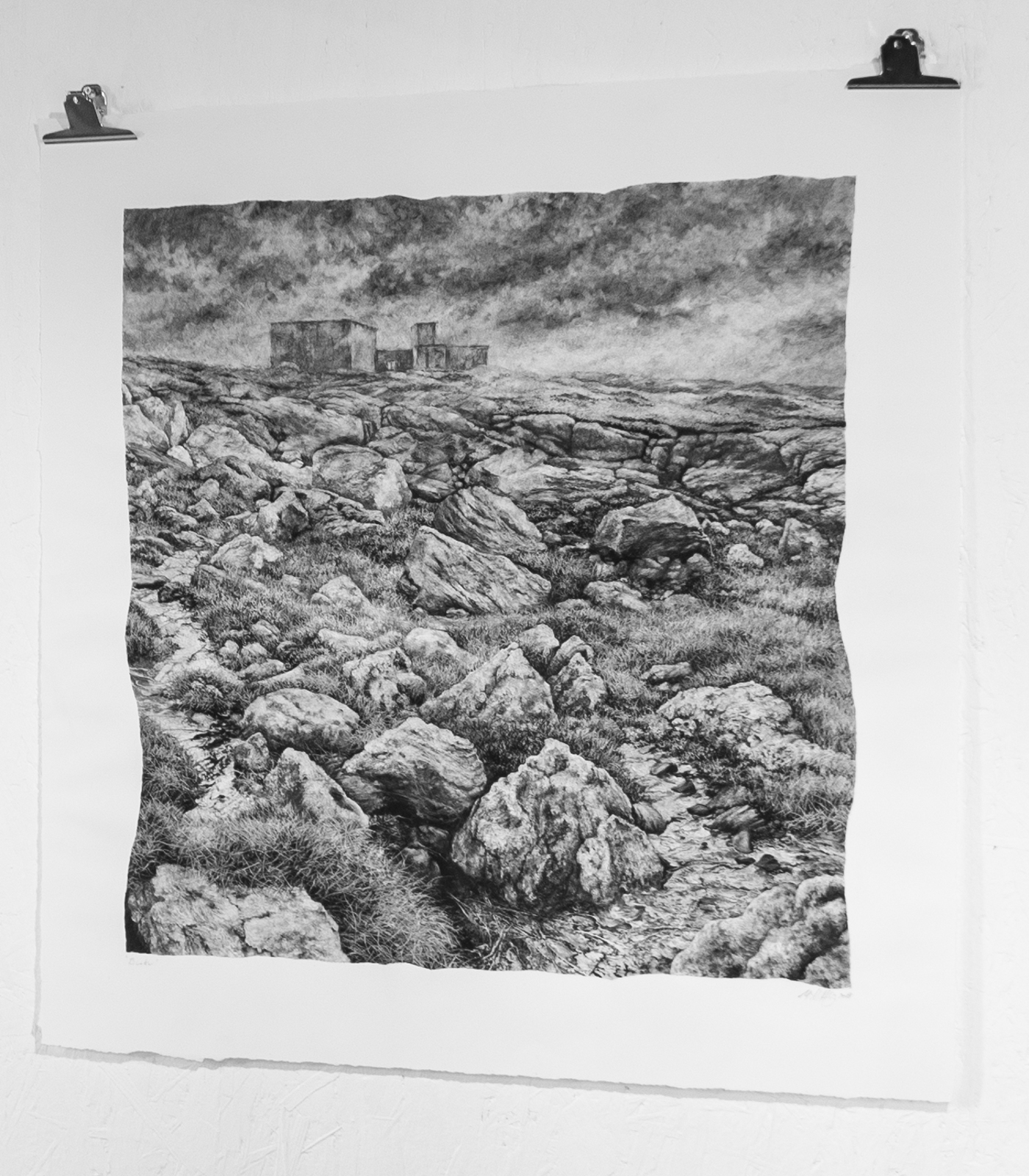 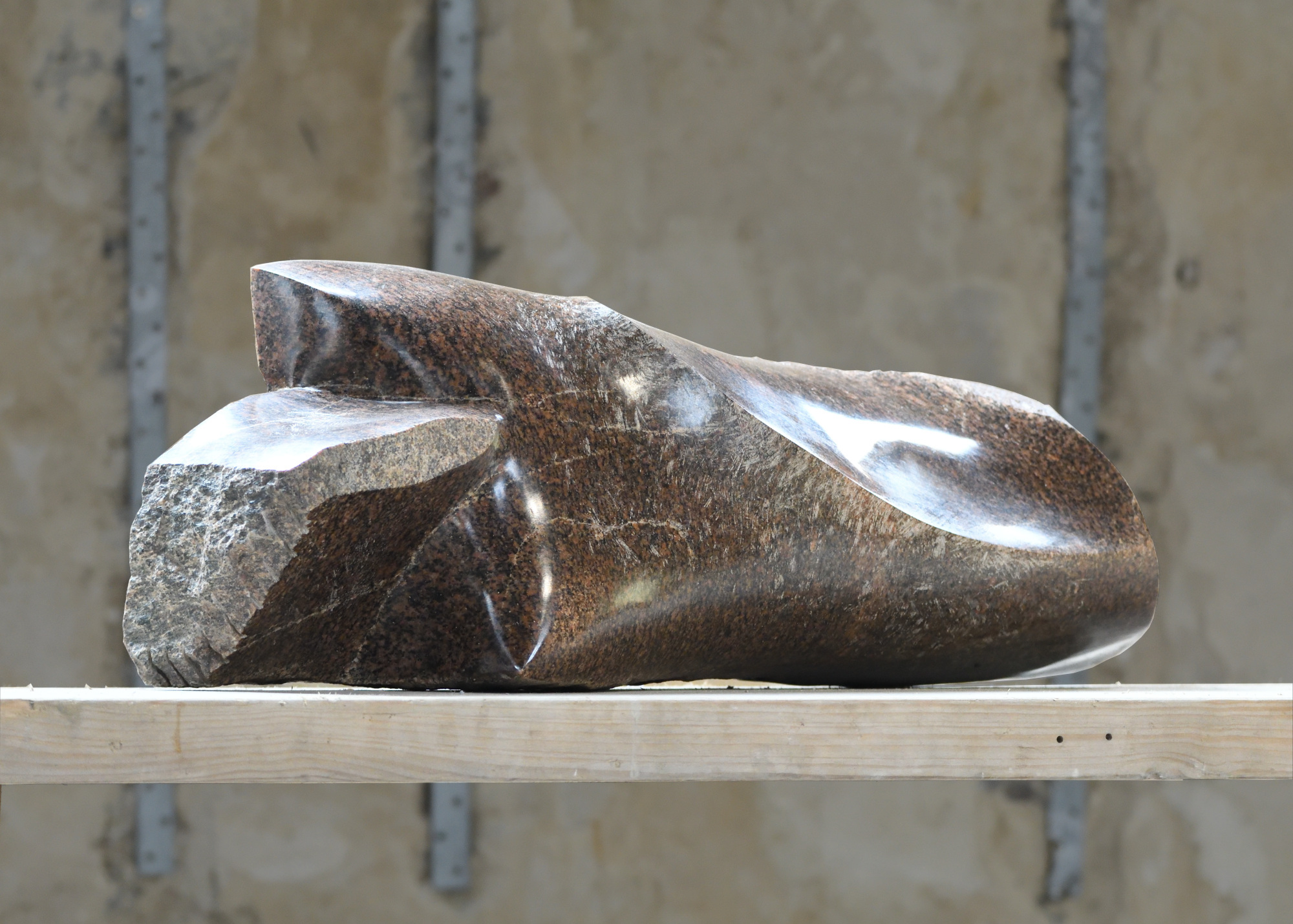 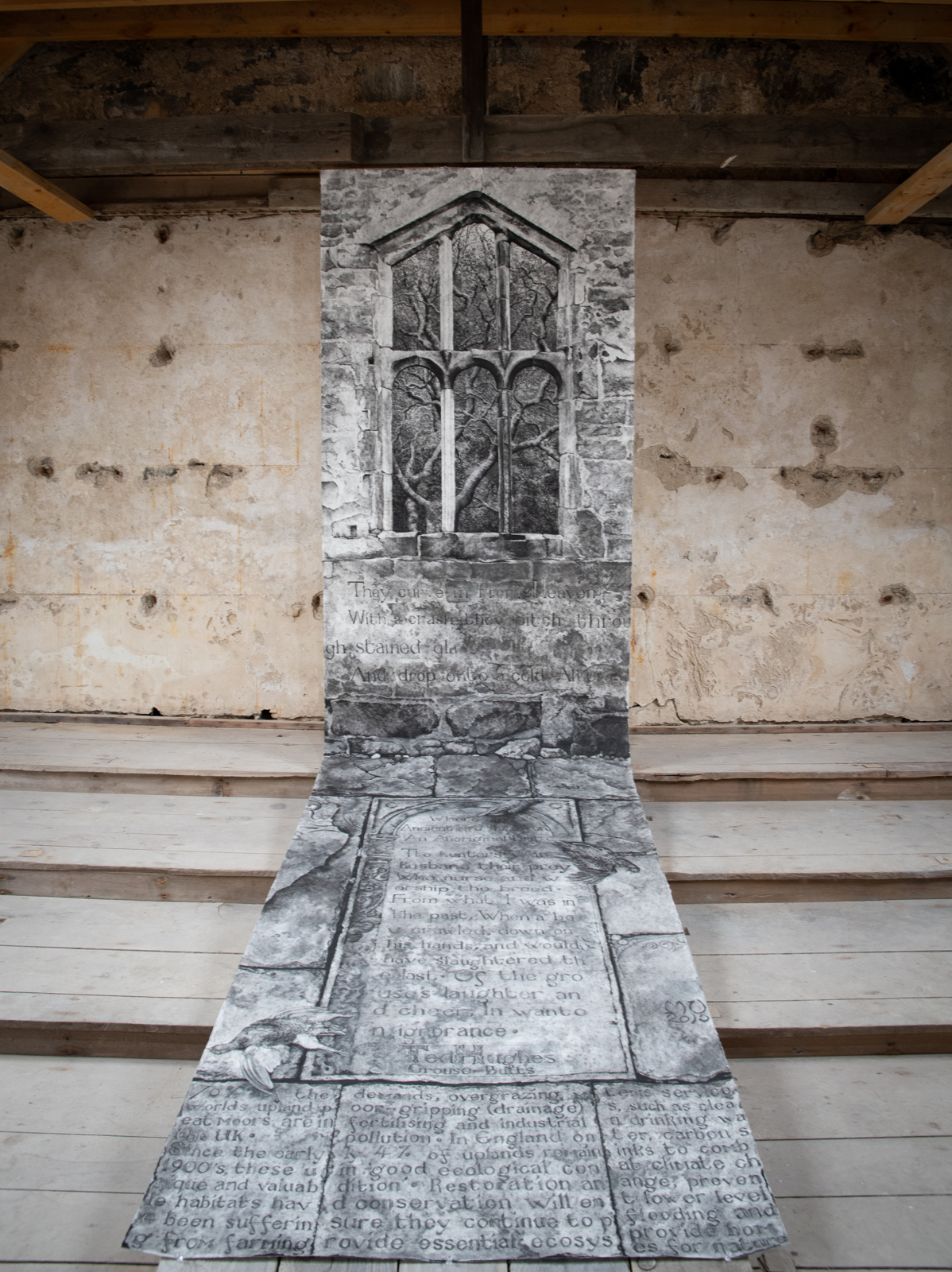 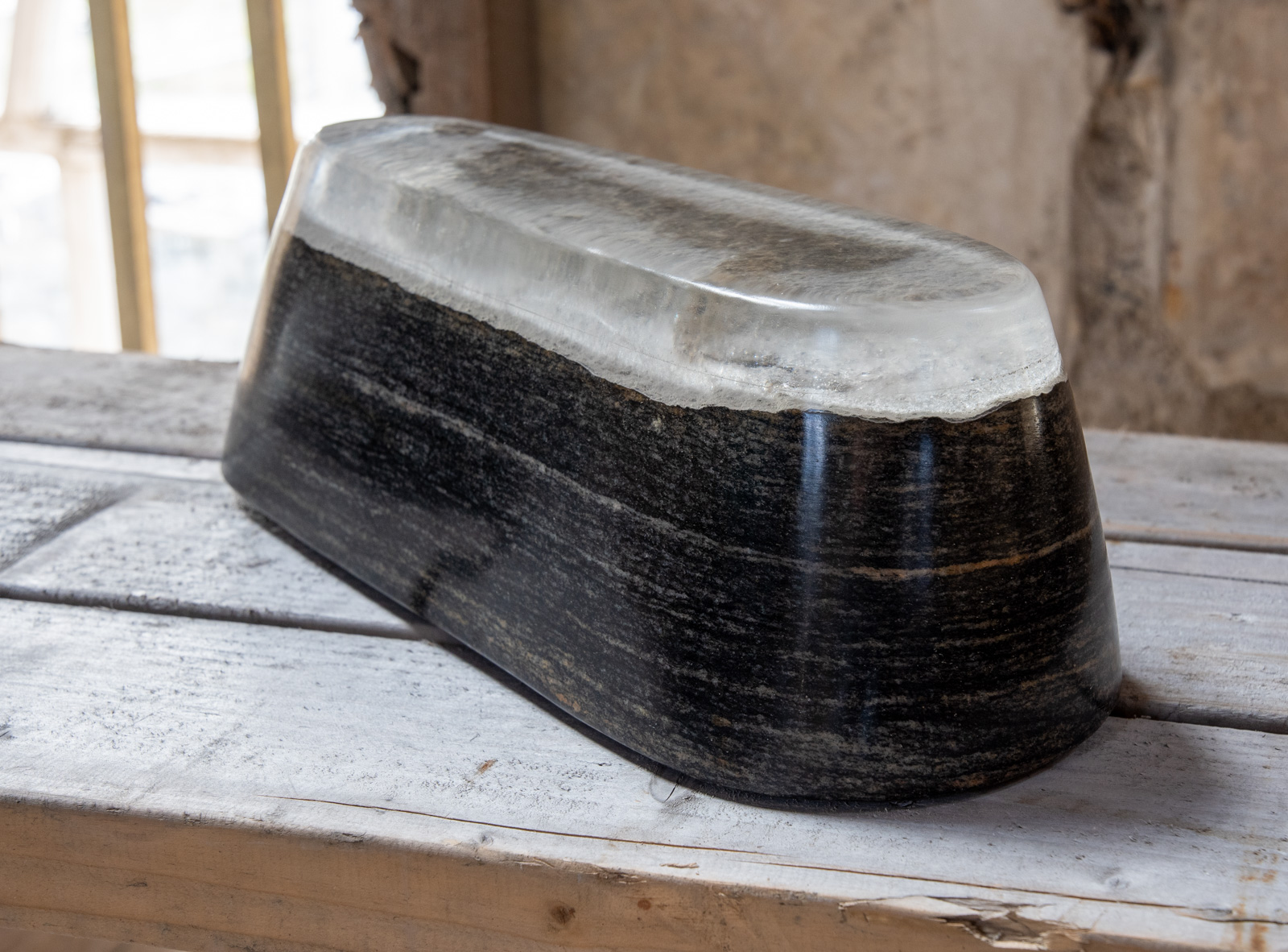 Is This My Island? 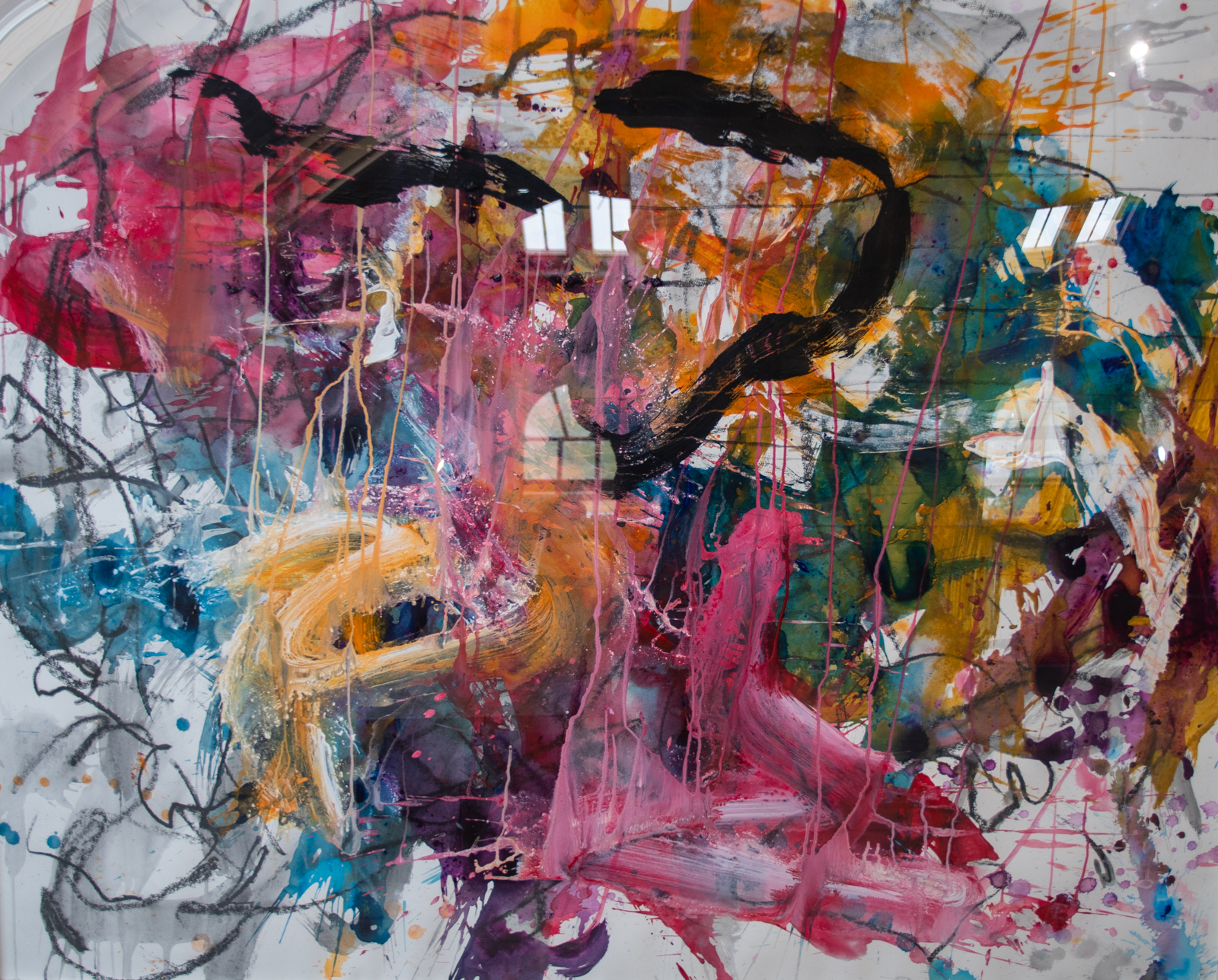 Beneath the Surface, Peat Preserves the Past 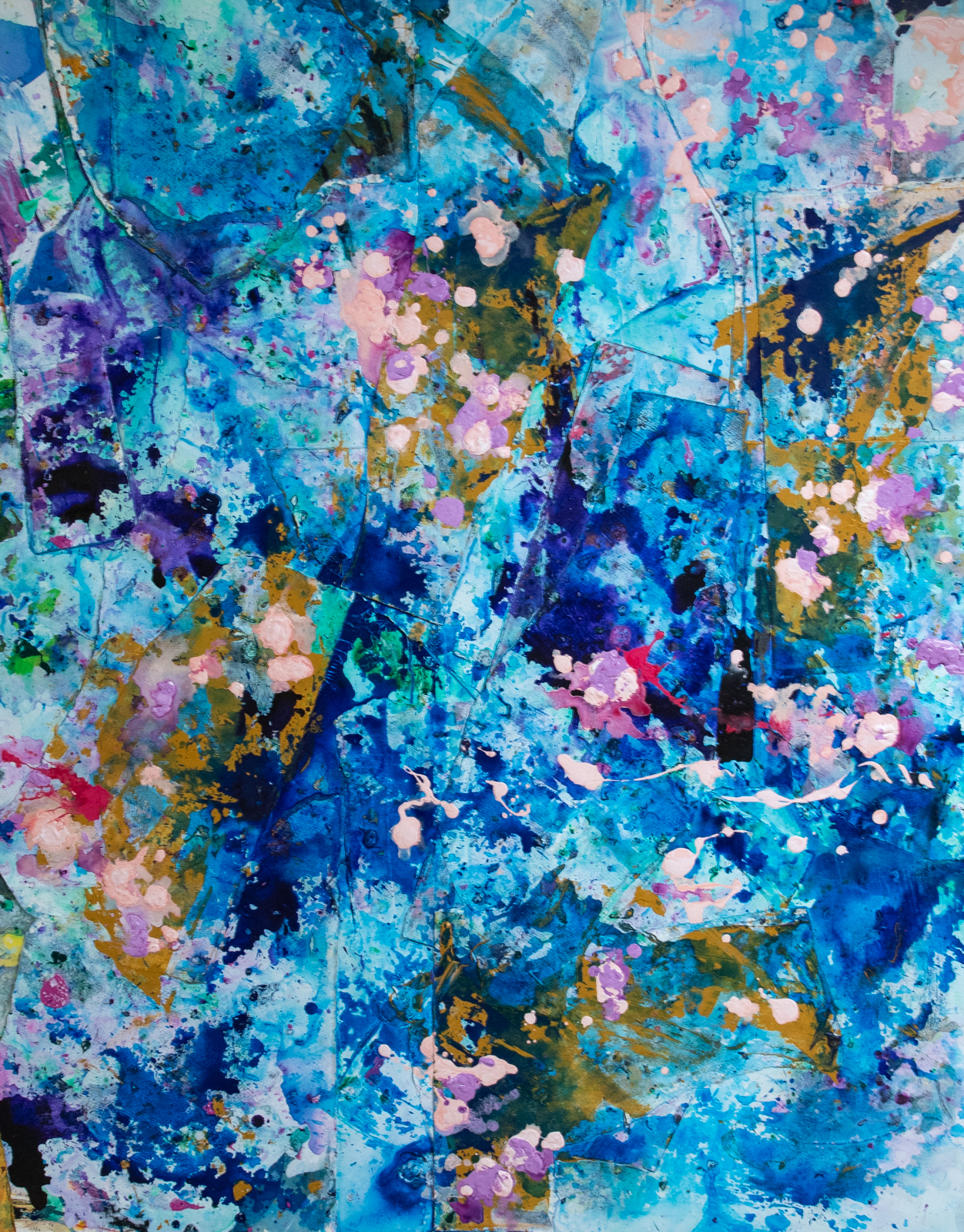 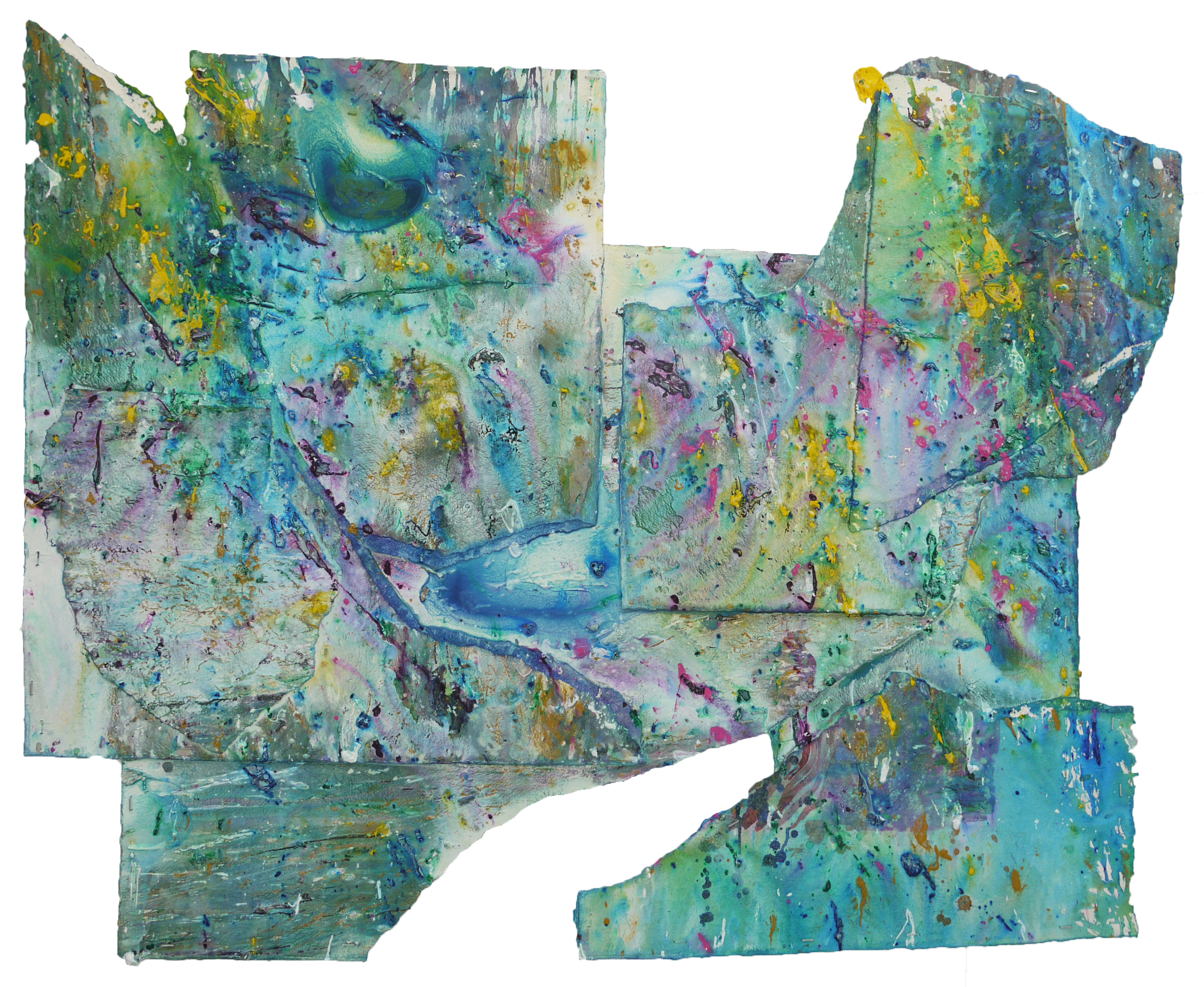 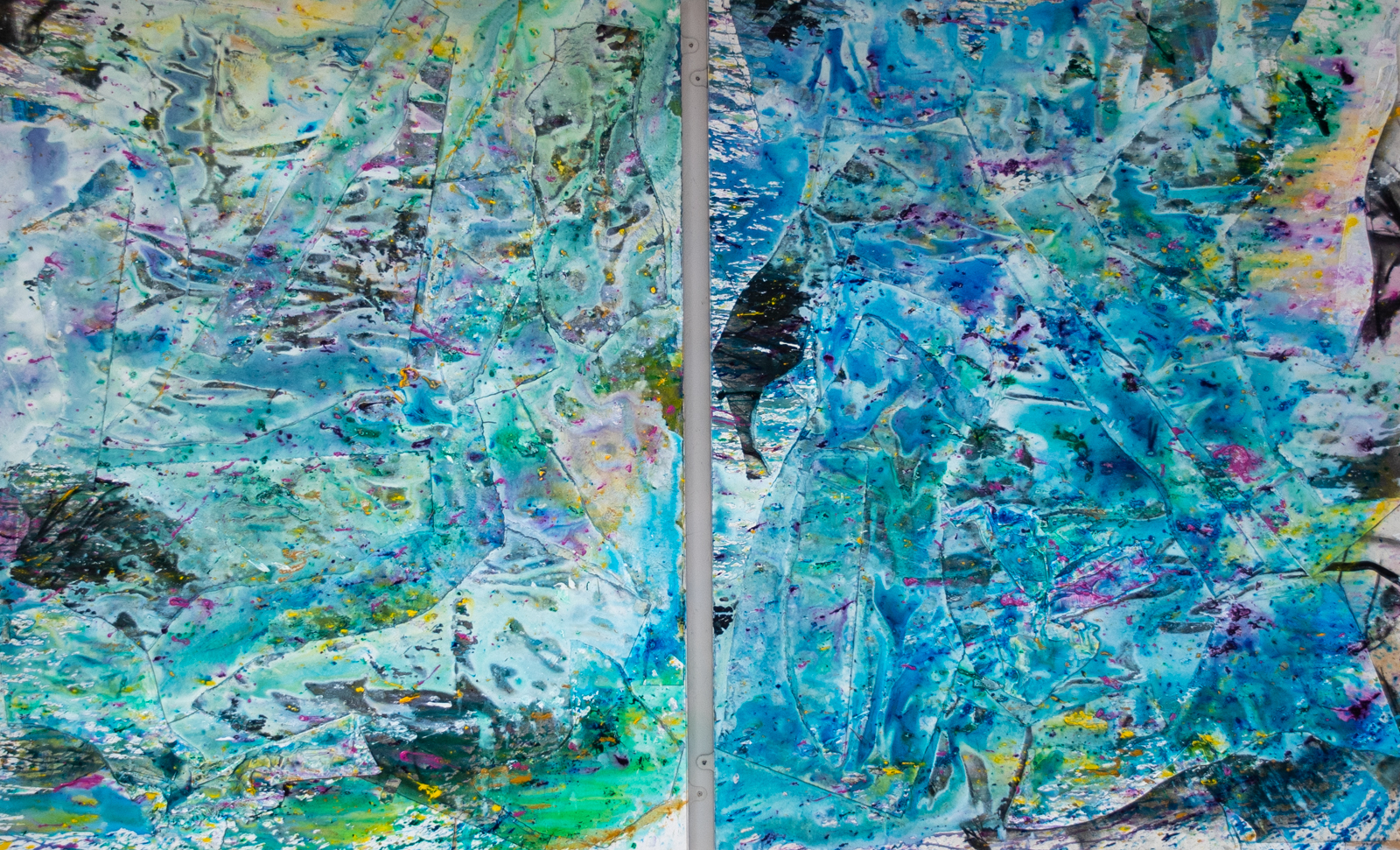 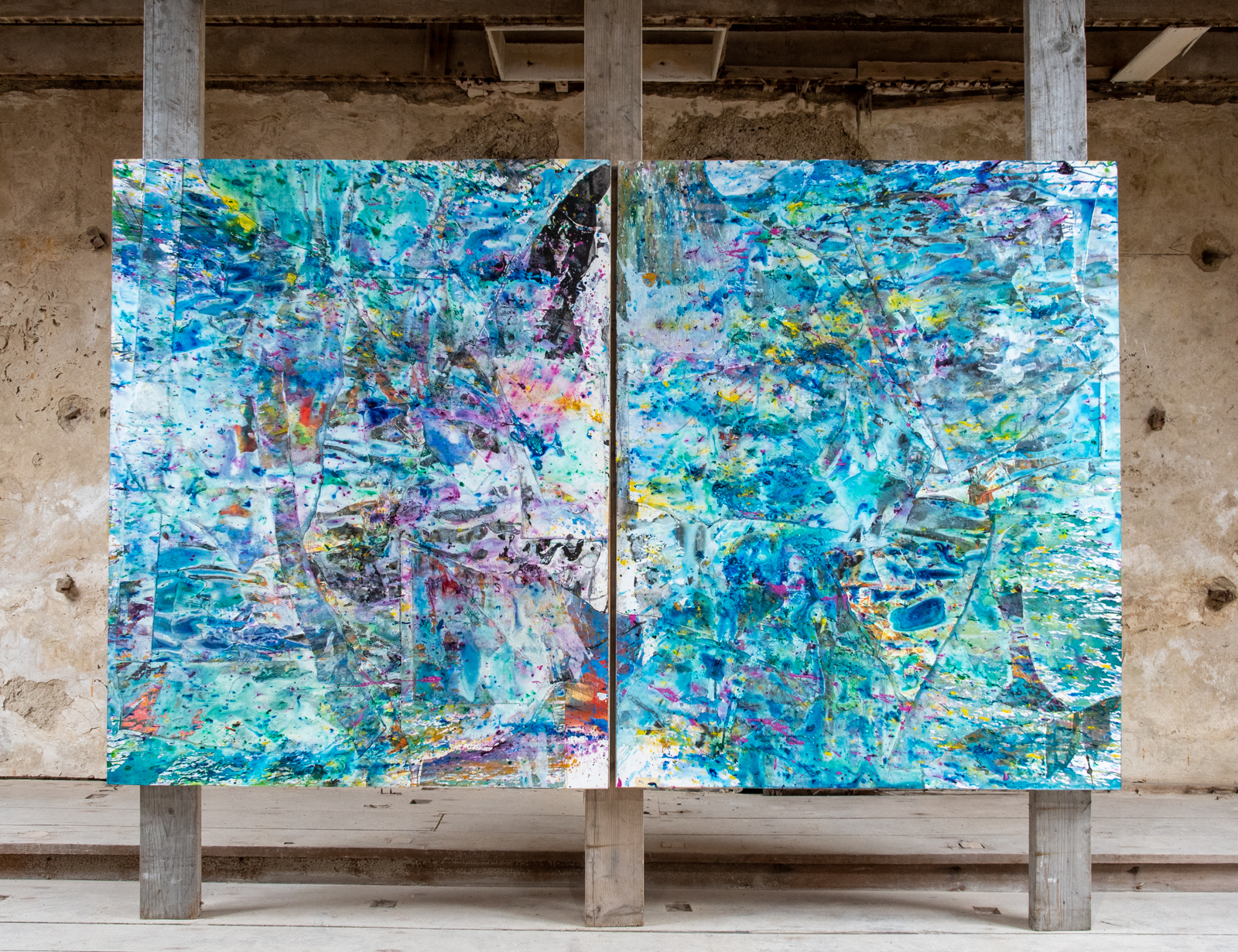 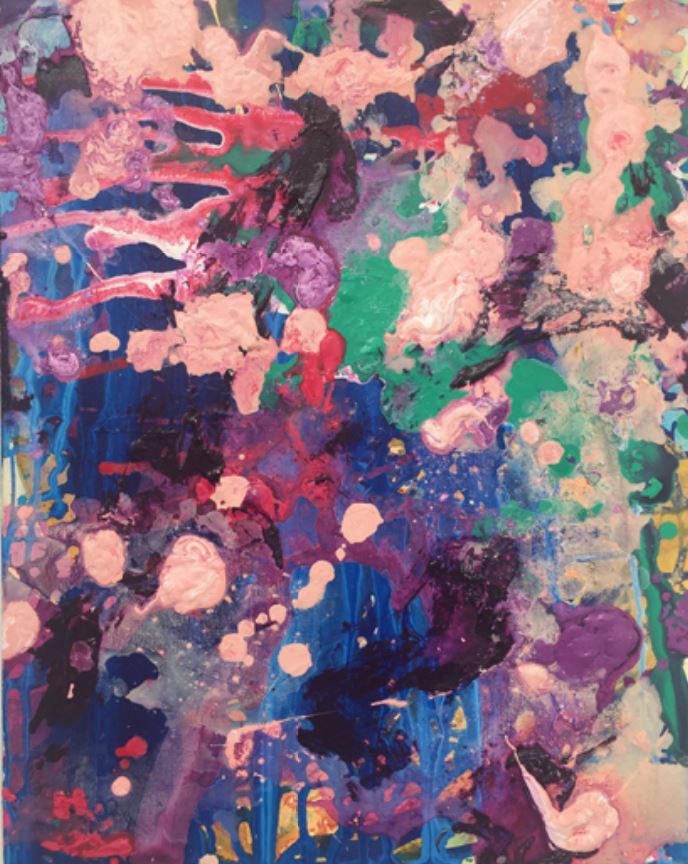 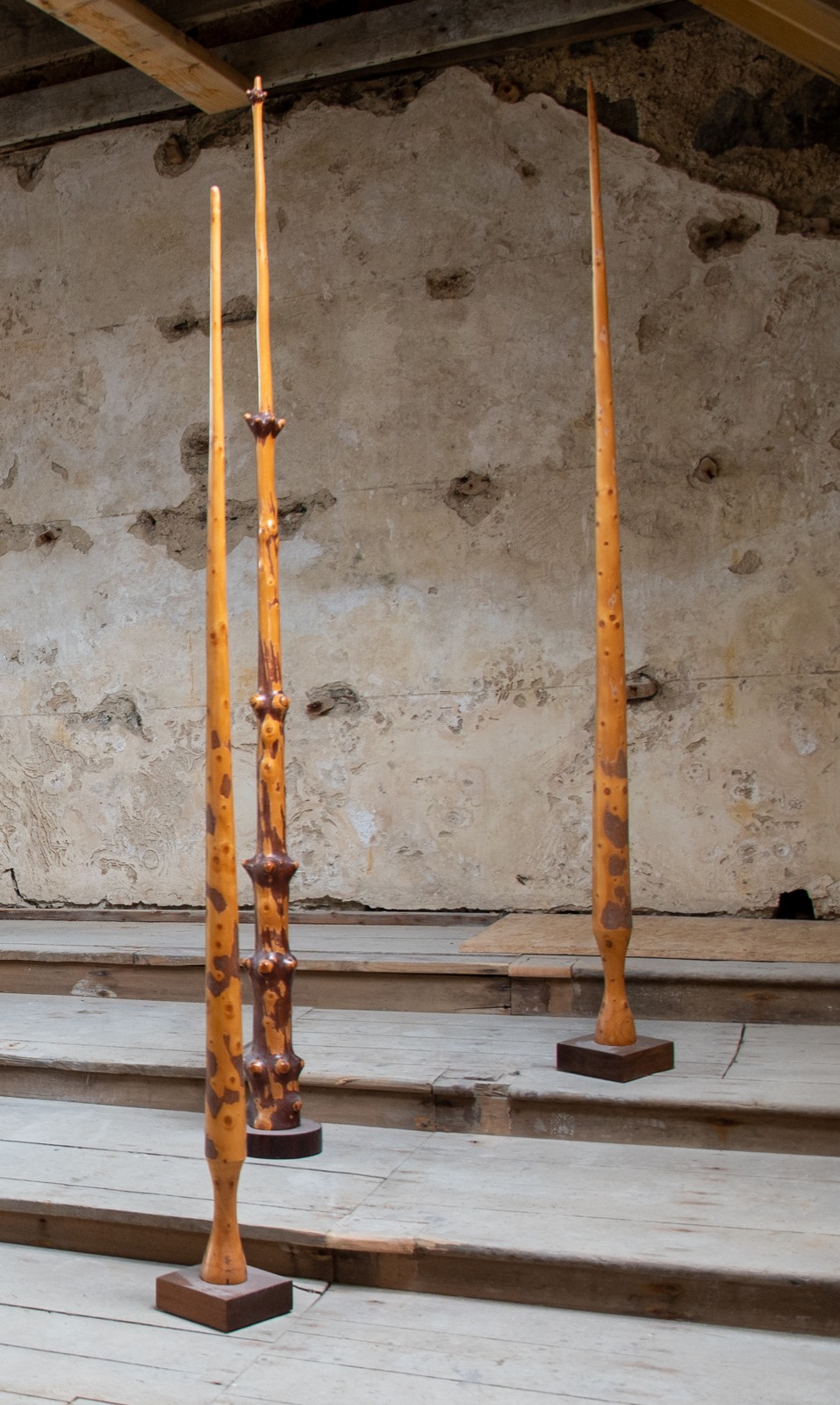 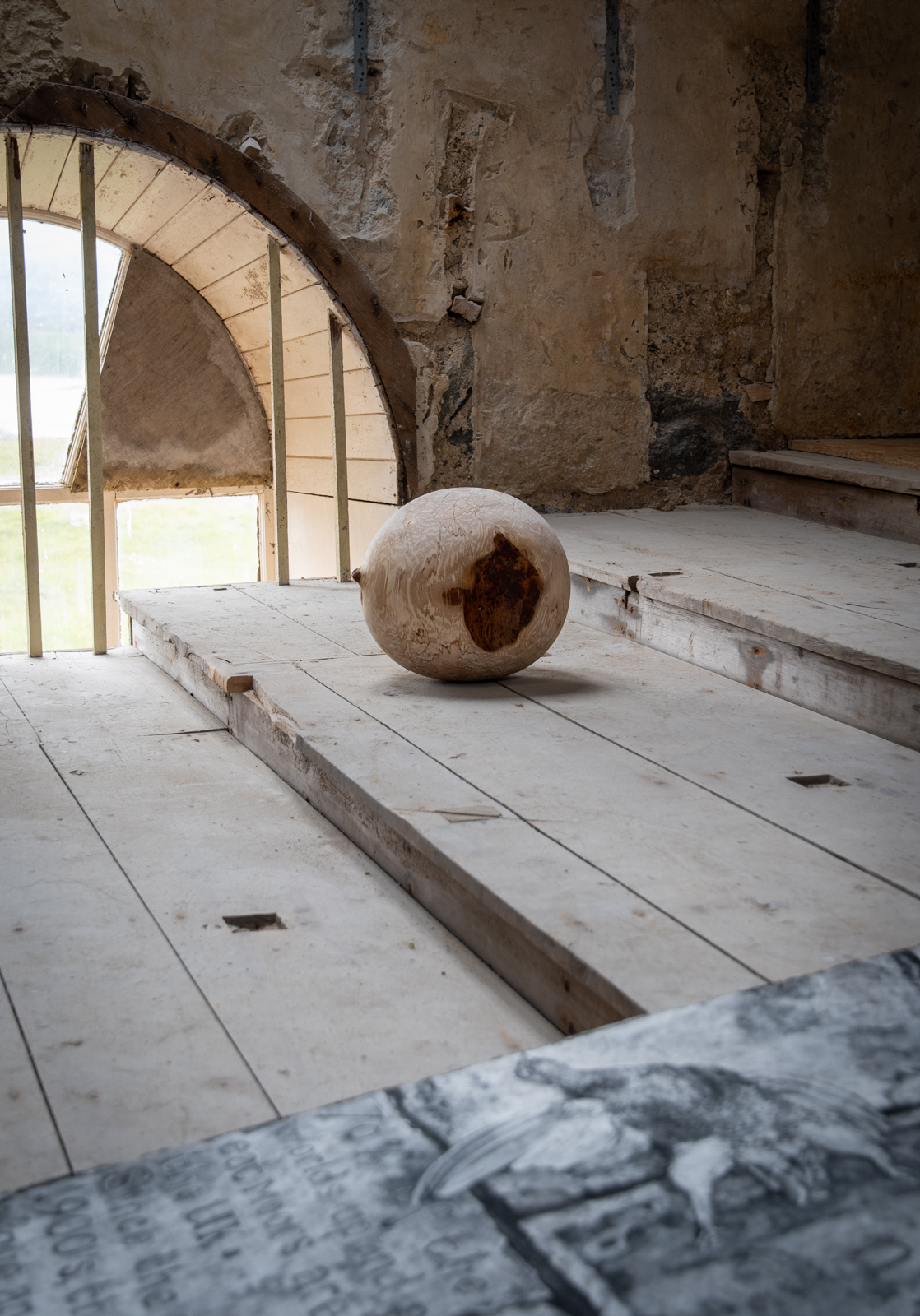 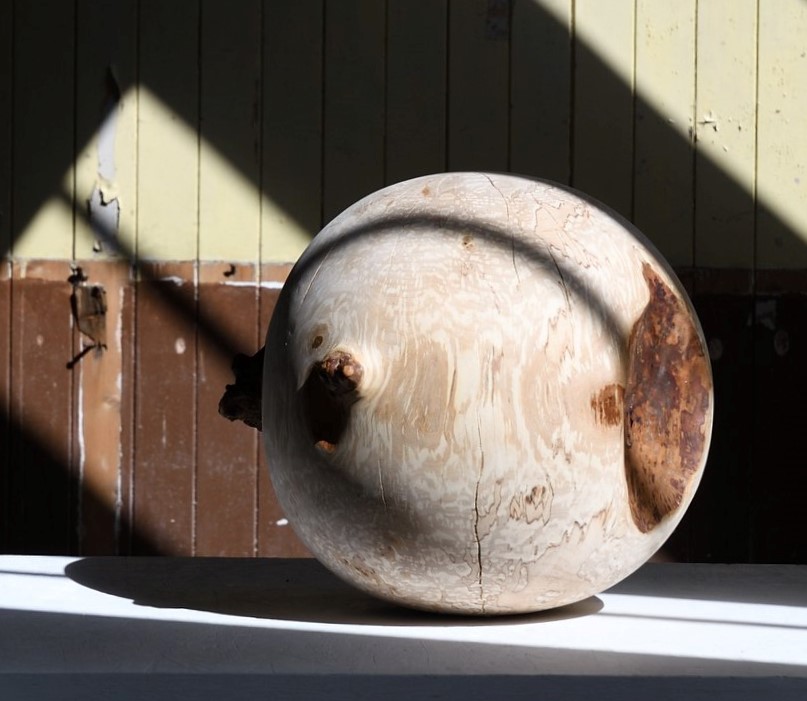 
Online cloud exhibition continues indefinately.
Please get in touch if you have any enquiries about the work in this show.
Please Share. 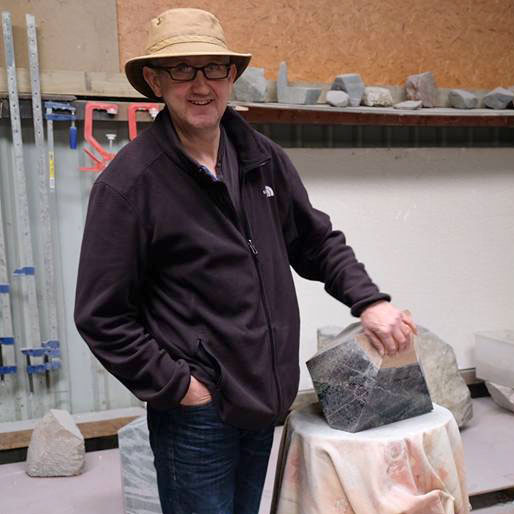 Andy Laffan thinks in three dimensions and after a career in interior design, space planning, exhibition design, computer visualisation and technology he is now developing his own artistic and curatorial practice here on the Isle of Lewis.

He is influenced by the magnificence of stone, it’s permanence as the core material of our planet, and yet it is fluid, in constant flux through natural erosion and metamorphosis by pressure and time, his stone work explores the interventions of nature, human industry and social development throughout history. Geology, biology and technology are common themes throughout his work. Combining elements of each within assemblages of different materials.


Geology - The earth, our planet, that lonely blue spot in the vastness of the universe, the intervention of time, represented by Lewisian Gneiss with its beautiful metamorphic strata, being 2 to 3 billion years old (almost 2/3 the age of the planet). Biology - Life, biological and natural intervention represented by wood or other organic material. Technology - Human and industrial interventions represented by acrylic, plastics, metals and other man-made or processed substances.

The long-term metamorphosis of our planet and the development of life in its infinite complexity have dominated the natural history of the earth since its creation, but now in the relative short time of modern human habitation our industrial and technological interventions are having a dramatic effect on the delicate fine balance between geology and biology. From the simple human usage of rock for building, to chemical separation of elements for industry, to farming and forestry of natural resources, to the manipulation of genetics and DNA. All to be used to fuel and build the modern world for the benefit of humankind. But at what cost?

His recent sculptures are carved, cut and polished (his own personal intervention), some are representational and some abstract, but all expose the material and minerals in all their natural beauty, the form is generally determined from the original found object. He is interested in applying direct carving principals as used by late 19th and early 20th century sculptors to a more contemporary implementation using assemblage, found objects, technology and landscape art to explore his own sculptural ideas. 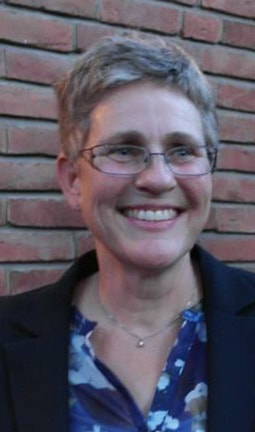 Marianne Broch works with a variety of natural materials, but keeps coming back to wood in its different forms, from large logs to untreated twigs and even cellulose.
Her approach is sober and down to earth. Grounded in daily work and life itself, her work is a search for the core of everything - something constant and unchangeable.
Form and texture is central to Broch's art. The tree is monumental and malleable and presents endless possibilities.
Clear references to forestry and Norwegian culture can be found in her pieces; but she also draws parallels to the particular, the individual. The walking stick represents the life journey we all undertake, reflected in its cracks and growth rings, our frailties outlined in the fragile graining of the tree mass.
In attempting to penetrate and expose the material of the tree, the artist reveals something of the human behind the mask.
Wandering in forests and mountains in search of materials is an important part of Broch´s process, as is the physical work required to form the wood. She seeks to transform familiar experiences and natural phenomena into objects that transcend their origin., and to guide the viewer to see things afresh. These works power comes from the forests and from folk culture, but they express something unexpected when they are given new forms and placed in our time. 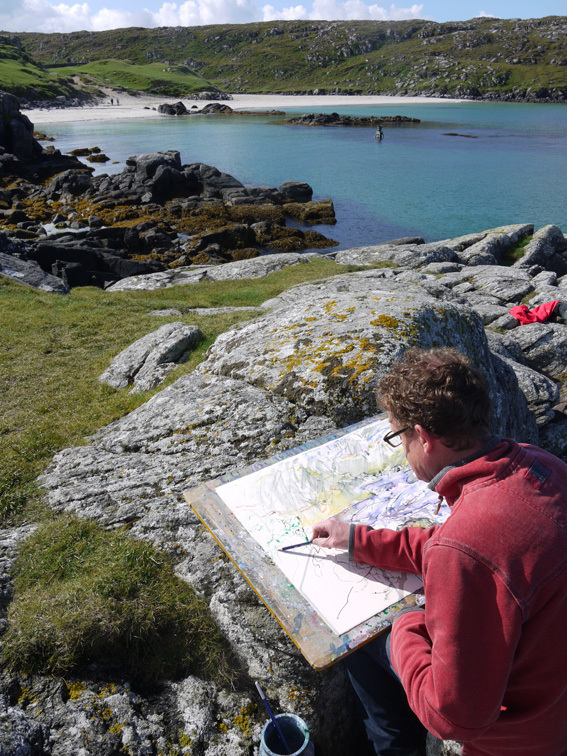 Whilst the paintings and drawings are essentially abstract in nature there has always been a sense of the landscape underpinning the content and subject matter. Born in Halifax I spent a lot of time walking and drawing the open and sweeping West Riding moorland.
The American Abstract Expressionist painters, particularly a Willem de Kooning retrospective exhibition seen in New York, whilst on a student exchange scheme during my fine art degree, have had a strong liberating influence on my approach towards painting.
Alongside painting I have always enjoyed teaching. My first teaching post, in 1985, stemmed from a residency at Christ’s Hospital School, West Sussex. Learning directly from practicing artists is one of the best forms of teaching and, in the two schools I have been head of department, I have always continued to offer an art residency post.
Over recent years the paintings have been heavily influenced by trips to the Isle of Lewis. A large body of this work was exhibited in 2018 at the An Lanntair Arts Centre, Stornoway. A smaller version of this show subsequently travelled to Gavagan Art, Settle, North Yorkshire and Resipole Gallery, Argyll.
In 2019 my partner, Margaret Uttley, and I developed Cliff Studio, Uig, Isle of Lewis, where we now paint full time. The effect of water and weather on the landscape, colour, light, movement of the sea, and the interplay of land, sea and sky are all elements continued within the paintings. 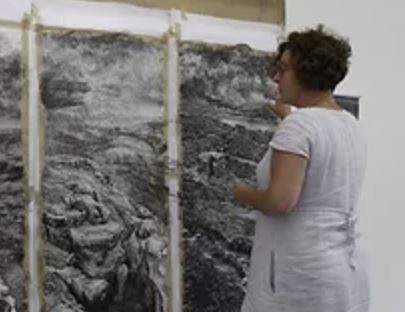 Margaret grew up in the town of Todmorden, West Yorkshire. Her childhood was heavily influenced by the wide-open spaces of the moorlands; oppressively soot stained, sand stone granite on the steep craggy slopes of the Calder Valley. Whilst studying an Art Foundation Course at Percival Whitley College, Halifax, she met David Knight whom she later married after completing her Fine Art Degree at Bristol Polytechnic in 1987.
Whilst living and working in the Yorkshire Dales, the conservation of the peat moorlands and fens became an underlying purpose to her work. Responding to the rich surfaces, textures and relationships between the immense ranges of living layers amongst the hard structures of the rigid limestone. With thought and time, the modest, immense sensitivity and dexterity of charcoal and graphite on paper, allowed her to communicate the importance for conserving these special places. In 2015 she had an Arts Council supported exhibition ‘Mor’ which toured to Dean Clough, Halifax, West Yorkshire, Gallery Oldham, Lancashire and Gavagan Art, Settle, North Yorkshire. Margaret gained permission from the Ted Hughes estate to use sections from his poem ‘Grouse-Butts’ from the ‘Remains of Elmet’, and structured ‘Mor’ to echo the sentiment and phrases of this poem written in 1978, which are still relevant today.
70% of the worlds upland peat moors are in the UK. Since the early 1900’s, these unique and valuable habitats have been suffering from farmland demands, overgrazing, moor gripping (drainage) fertilising and industrial pollution. In England only 4% of uplands remain in good ecological condition. Restoration and conservation will ensure they continue to provide essential ecosystems services, such as clean drinking water, carbon sinks to help combat climate change, prevent lower level flooding in towns and villages, and provide homes for nature.
David and Margaret began to visit the Isle of Lewis in the Outer Hebrides five years ago, when Margaret was researching for the ‘Mor’ exhibition. Looking at how different communities respond to the moorlands and what peat means to their communities. In England it is illegal to farm peat whereas in Scotland and Ireland it is still used for fuel and flavoring the hops for certain whisky distilleries. Without the heat that peat has provided for generations and the heather providing roofing shelter for homes, remote communities would have struggled to develop and sustain.