Q. What is your interest or connection with the Outer Hebrides?

A. I am a well established Scottish artist – painter, author, speaker, tutor - graduated from ECA 15 years ago and full time self-employed artist ever since. Environment, landscape, wildlife are my motivation and inspiration and Scotland’s islands excite me most of all. I grew up inland near Edinburgh but have been visiting the islands since childhood and now live on the Fife coast with one of the largest islands of the Forth - Inchkeith - visible from our bedroom window. The island I am most familiar with is the Isle of May, positioned where the Firth of Forth joins the North Sea. I spend one to two weeks a year on this seabird island haven. The island is managed by SNH and is home in spring and summer to 50,000 breeding pairs of puffins, to kittiwakes, guillemots, razorbills, terns, shags, gulls and much more. In autumn it’s the pupping site for hundreds of grey seals. I stay in the Bird Observatory and other than wildlife recording duties I sketch and paint from dawn ‘til dusk. I have had lots of one-off trips to Scottish west coast islands including more than a decade ago to Lewis to run two painting sessions for the Lewis Art Club. I’ve stayed on Rum, Jura, Islay, Orkney, Shetland, Skye, Mull and more. I’ve been on a voyage circumnavigating St Kilda and Fair Isle but unfortunately we couldn’t land on either because of huge seas. Apart from my three days on Lewis I had rather neglected the Outer Hebrides until April 2019 when we had a trip to South Uist plus a far too short amount of time on Eriskay, Barra and Vatersay. Such places! It was a wonderful week of wonderful island weather - storm, sun, cool, heat... and birdlife in far greater variety and profusion than I had ever hoped for (birds are a very big thing, both personally and work-wise, including lots of volunteer bird surveys). I managed to get more work done than I’d expected despite having our young son with us. I painted in watercolour outdoors and from life, my preferred and primary way. I have chosen to present these works as a series of three diptychs (two watercolours within each of three frames) to give a sense of the varied nature (and nature!) of the islands and of my journey to/through/across them. I know I will always have my island yearning and will always continue to explore it in and through my art. I love and respect the islands and what they represent and I’m glad to be able to show this to my followers. website - www.leodufeu.co.uk (badly out of date, revamped website due spring 2020) Facebook, Instagram, Twitter - 'Leo du Feu artist' blog - www.landscapeartnaturebirds.blogspot.com

As the title says: an excavator dangling its head above the beach, ringed plover and dunlin barely noticeable among the strand; a wheatear standing proud to a backdrop of turbines.

This white-tailed / sea eagle flew right over, close and slow. One of several seen during our time on South Uist and the best by far view I've ever had. It spilled from the hills as mists in the morning. 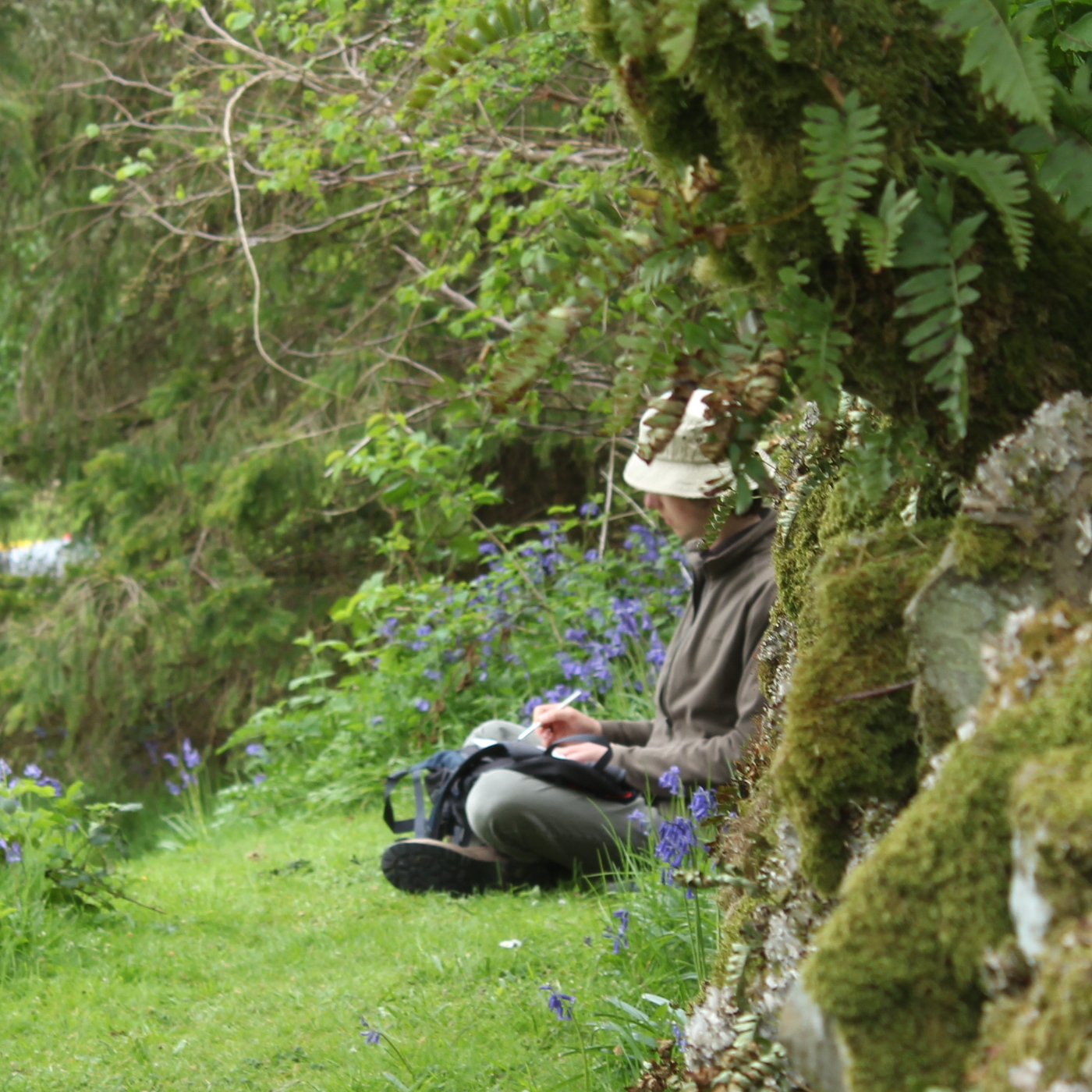 I'm a painter, tutor and author of two books of my art and travel sketches and writings. My passion for wildlife and environment and trying to help conserve them leads to my work in recent years primarily depicting wild animals in the landscape. Usually created from life, Out There (my favourite place to be). I especially love birds and undertake regular volunteer counts for the British Trust for Ornithology (BTO) along with various other conservation efforts.

My Discovered Worlds are the other side of my creative practice and the side which most people are less familiar with. Despite their otherworldly look these works are still strongly inspired by nature but with my imagination allowed to make more of its leaning towards the fantastical, the direction it has leant in all through and since childhood.

- one of Edinburgh-based charity Art in Healthcare’s main Artist Facilitators, including running weekly art session as part of their Room For Art outreach programme.

- Since 2013 have been Artist Adviser on Art in Healthcare's Art Selection Committee.

- Self-run ongoing Scotland By Rail art-travel-nature project to explore and highlight our rail-accessible landscapes. I exhibit and speak at railway events, keep a blog about my explorations, etc. Supported by ScotRail.

- Works in many private collections.

- often invited to speak about my art and my Scotland By Rail travels to groups including the Saltire Society, Friends of the RSA, Blackwell's Bookshops, Linlithgow Book Festival, Scottish Arts Club, local art and nature groups, etc.

May 2014 - In the Outdoors (duo show) Bon Papillon Edinburgh